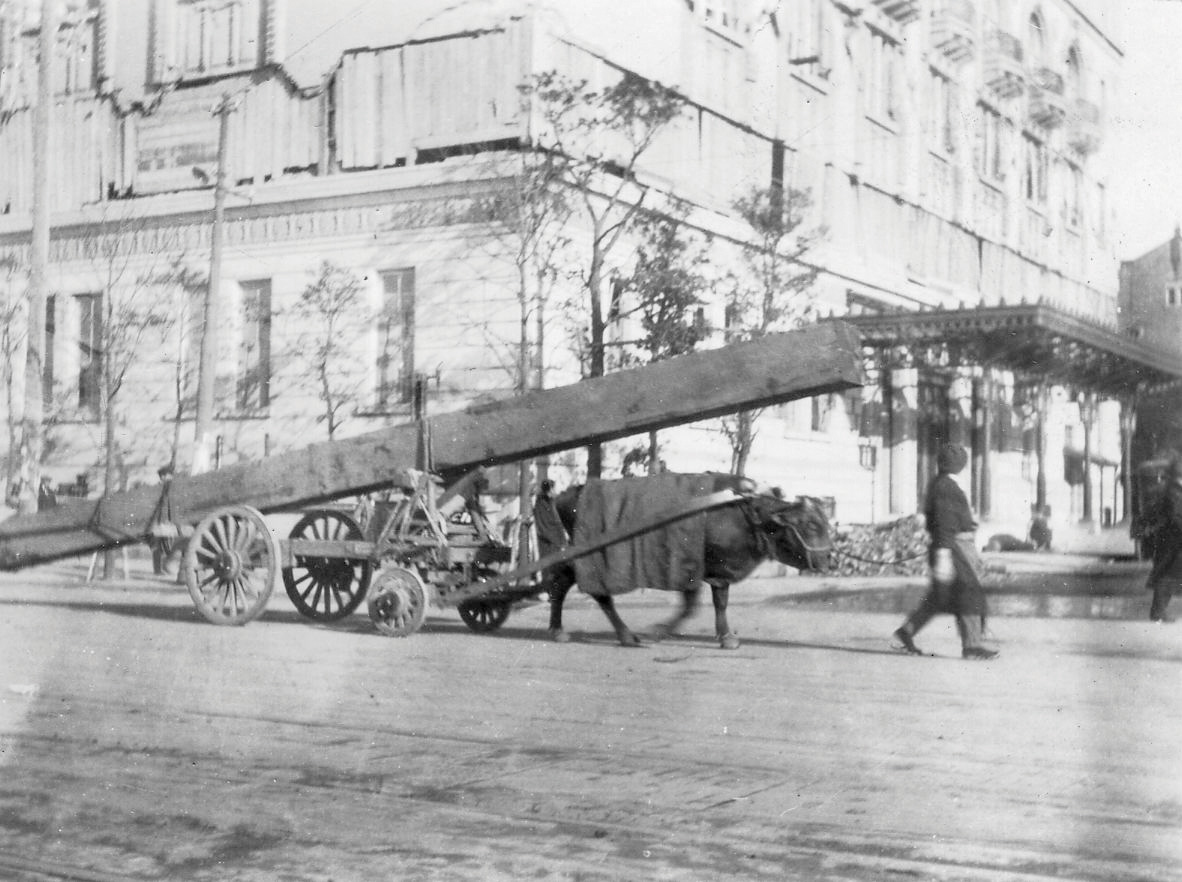 To clearly understand the premise upon which the Pacific Lumber Inspection Bureau (PLIB) is built, one must look back to the late 1800s and how the lumber industry operated at that time. Back then, when a lumber buyer ordered a cargo of lumber, of only one thing could he be sure– there would be very few knots because the loggers of that era didn’t bother with logs above the first limb. Beyond that, neither he nor the manufacture was he was exactly certain what that order would consist of until the stock was piled on the dock, ready to ship. It might contain boards that were one inch thick at one end and close to two inches thick on the other, and likely would have some boards that varied in width from one end to the other. Someone has aptly noted that buying and selling lumber in those days was more of an adventure than a business. These chaotic conditions that existed eventually caused manufacturers to realize the benefits of establishing standards and having a means of certifying that their products met those standards.

These are the conditions that led to the formation of the PLIB in 1903 when a group of Oregon, Washington, and British Columbia lumbermen met with the members of the Pacific Coast Lumber Manufacturers Association to form the Pacific Coast Lumber Inspection Bureau with the goal of bringing some standardization to the products and processes of the lumber trade. This pioneer organization exceeded its founders’ hopes and in 1906 it was agreed that a more formal organization was needed to lend greater prestige to the certification process and to meet the demand for increased services. PLIB’s original Articles of Incorporation, which remain in PLIB’s archives, were signed on October 27, 1906, by E.G. Griggs of St. Paul & Tacoma Lumber Co., E.G. Ames of Puget Mill Co., and Richard H. Alexander of BC Mills, Timber & Trading Co. Article One amended the name to Pacific Lumber Inspection Bureau.

Much of the credit for PLIB’s formation belongs to Richard H. Alexander, recognized for years as one of the foremost figures in BC lumber circles. Alexander was an ardent believer in associations and lent untiring effort toward their affairs. His greatest work in that direction was the formation of PLIB and he is largely responsible for its international character. Richard’s son, Fred Alexander, served the Bureau faithfully as its first Secretary-Manager, from its inception in 1906 to his death in 1941. Another son, R.H.H. Alexander, was Secretary of the BC Lumber & Shingle Manufacturers Association.

PLIB’s primary purpose has remained straightforward and largely unchanged since its inception– to provide an agency to certify that lumber grades, tally, and order requirements had been complied with by the shipping mill, and to correct abuses that had crept into the lumber trade from both the manufacturing and receiving ends. The fundamental principle of the organization over the years has always been to conduct fair and impartial inspections at points of manufacture and loading.

PLIB was organized as, and continues to operate as, a not-for-profit organization. Original members purchased a single share of stock for the sum of $1,000, and the Articles of Incorporation stated that no person, firm, or corporation could hold or own more than one share of capital stock. Although PLIB has always been not-for-profit, it wasn’t until July 1977 when, under the direction of Secretary-Manager George Thompson, the Bureau was restructured and gained recognition by the U.S. Internal Revenue Service as a member-based, tax-exempt organization.

From its modest beginnings with nine original stockholder members in 1906, the Bureau grew rapidly every year as new mills joined. By the first Annual Meeting in January 1907, just a few months after the Articles of Incorporation had been signed, PLIB had 23 stockholders, and the growth continued. PLIB membership reached a peak in terms of the number of mills in 1924 when 311 manufacturers used the Bureau’s services. The Great Depression took its toll on the industry and on PLIB as well, but another boom in the 1950s brought the number back to just shy of 300.

In January 2019, PLIB merged operations with the West Coast Lumber Inspection Bureau (WCLIB), an organization formed in 1911 when four smaller regional lumber associations merged. WCLIB was instrumental in establishing the first national committee for lumber standardization under the auspices of the U.S. Department of Commerce. That group is now known as the American Lumber Standards Committee (ALSC). From the start right up until the 2019 merger, WCLIB and PLIB co-existed as friendly competitors providing grading and inspection services, as well as close cooperators under ALSC. This already close relationship helped smooth the transition into a single, merged organization.

A look at the current PLIB membership roster reveals a mix of new members along with several who have been with the Bureau since it began operations. This mix of newer and longer-term members is mirrored in the current Board of Directors’ make-up. Many of the directors’ companies have been associated with PLIB for decades and over multiple generations. Despite being competitors who often have opposing interests, PLIB’s Board of Directors has successfully guided the Bureau through more than 100 years of change, keeping the common good of all members foremost in its actions – a true testament to the membership’s integrity.

Of course, central to the day-to-day operation of the Bureau throughout its history has been the lumber inspector. For most of its history, PLIB, rather than the individual mills, employed the lumber inspectors and these men were responsible for grading the lumber at the mills. There were two types of inspectors, resident, and transient. The former, though not a member of the mill staff, reported to work with the other mill employees on a day to day basis. The transient inspectors had similar duties except that they were required to travel from the mill to mill, usually providing service to mills that were too small to require a full-time inspector. During the 1920s and again in the 1950s, PLIB employed more than 700 inspectors at a time plus numerous supervisors who traveled to the mills overseeing the inspectors. By the early 1980s, the system of using inspectors employed by the Bureau had changed, and most inspectors who had once been on the PLIB payroll were employed directly by the mills.

One of the finest written tributes to the PLIB lumber inspector appeared in the 1956 British Columbia publication Seaboard. Reproduced below, the description is confirmation of the respect and authority these men and PLIB had developed over the organization’s first half-century:

Bill Nicholson, grading pencil tucked in his hatband, steel measure in one hand, runs an expert eye along the face of the timber destined for a mine in South Africa. It is on grade, he notes; dimensions well within the specifications. He nods briefly and the heavy timber rumbles along the steel rolls to join others waiting for export.

Bill Nicholson adds the piece to his tally sheet and turns critically to the next. He is the “man between,” the protector of the buyer on one hand and the mill owner on the other.

In the same mill, there are others like him, men selected for their lumber know-how, top marks in grading schools, and practical experience. They are responsible neither to the mill nor the buyer – but to their own independent organization, the Pacific Lumber Inspection Bureau.

These men can recite ‘R’ List and 15 List, or any other export grading code by paragraph or page. They read boards and timbers flowing toward them endlessly down green chains, and dry chains, and timber conveyors all over the Canadian and American Northwest. Because of the constant watch of this intent, denim-clad men, manufacturing standards remain high and constant. The buyer can rest confident that he will receive the quantity and quality he contracted for.

Bill Nicholson and his fellows are the guardians of grade. Their role as watchdogs of lumber quality is indispensable and one that has increased in importance since the creation of the PLIB fifty years ago.

Bill Nicholson in mackinaw and denim pants, marking pencil in hand, does an important job for manufacturer and buyer alike. He is the watchdog of quality… the guardian of lumber grade in the Pacific Northwest.

Fairness is our compass

It has been contended at times that the Bureau, a co-operative body supported financially by the lumber manufacturers, must favor the supporting mills. Contrary to that contention, the Bureau maintains that any inspection organization, be it a co-operative, private or governmental agency, will fall of its own weight unless it is absolutely fair in all its dealings. Fairness has been the aim of the Bureau during its 100+ years of existence and will continue to be our aim going forward. We take to heart and always endeavor to live up to the words of F. W. Alexander, PLIB’s first Secretary-Manager:

“When there are two parties to a bargain, it is only reasonable that the interests of both should be protected.”