We hope you find our FAQs helpful and informative. If you have questions not answered here, submit them to PLIB using our Ask the Inspector form. We will get back to you by phone or email, whichever is your preference.

When placing bolts, nails, or other fasteners, do I need to be concerned with the location of bond lines?

Adhesives used in structural glued laminated timber (glulam) are engineered to be as strong as the wood substrates which they bond. They are subject to stringent manufacturing requirements and rigorous qualification testing prior to acceptance for use. Additionally, tests for strength and durability are performed in the laminating plant on a daily basis. These measures result in an adhesive bond with strength and durability comparable to the wood itself. Consequently, fasteners such as bolts and nails can be placed without regard to the location or orientation of bond lines.

My structural evaluation of an existing structure indicates that my glulam beam is insufficient to support additional loads. Can I add laminations to the bottom of the beam to make it deeper and increase its capacity? Are there issues I should be aware of?

This type of repair can be performed but it poses multiple challenges including (1) lamination quality, (2) bond quality, and (3) notch restrictions at the end of the beam. Additionally, (4) transformed section analysis will be required for the structural evaluation of the repaired beam.

What is the difference between balanced and unbalanced glulam beams? 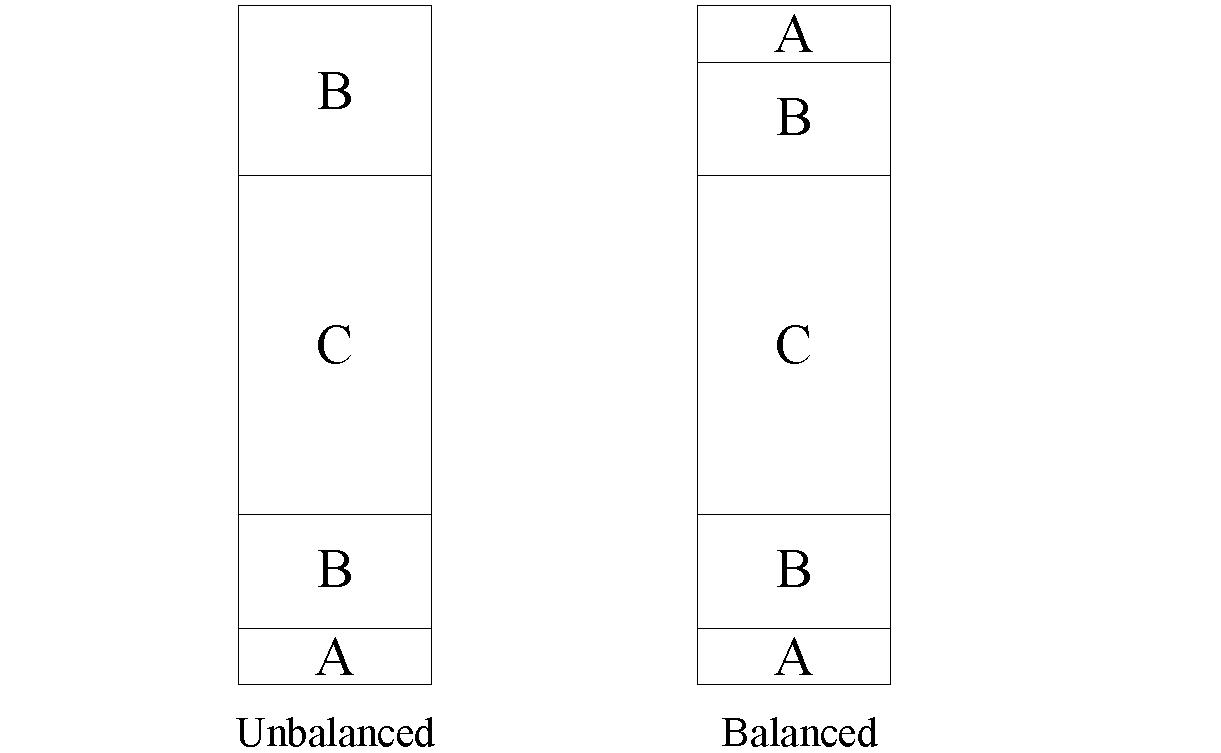 Glulam beams are typically designed with the highest quality laminations placed in zones of maximum expected flexural tension stresses. A somewhat lower grade can be used to resist flexural compression stresses with no reduction in beam capacity. Consequently, lay-ups are divided into two categories: balanced and unbalanced (see Figure). Balanced beams are typically used for continuous-span and cantilevered applications where both the top and bottom of the beam will be subject to flexural tension. Unbalanced beams are preferred for simple spans because they use lumber resources more efficiently and are consequently more economical than balanced beams. Unbalanced beams can also accommodate short cantilevers (up to about 20% of the main span).

To avoid improper installation, glulam beams are distinctively marked with a “TOP” stamp. Protective wrappings on glulam beams are also typically stapled on the top face of the beam to avoid damaging the faces that will be exposed to view in the finished structure.

I have a glulam beam that is deeper than I need. Can I rip it to a shallower depth? Should I remove the excess depth from the top or from the bottom?

Can glulam be used to meet the requirements of Heavy Timber Construction?

Heavy Timber Construction (HTC) is a specific type of construction recognized in the building codes for its excellent fire performance. To achieve the required performance, minimum sizes of all structural timber members are prescribed and concealed spaces (such as attics and crawl spaces) are prohibited. The minimum prescribed sizes in the building code are typically expressed in nominal dimensions for sawn timbers. A table with equivalent minimum sizes for structural glued laminated timber is provided by the International Building Code. When properly sized according to this table and all loading requirements, glulam meets the requirements of heavy timber construction. 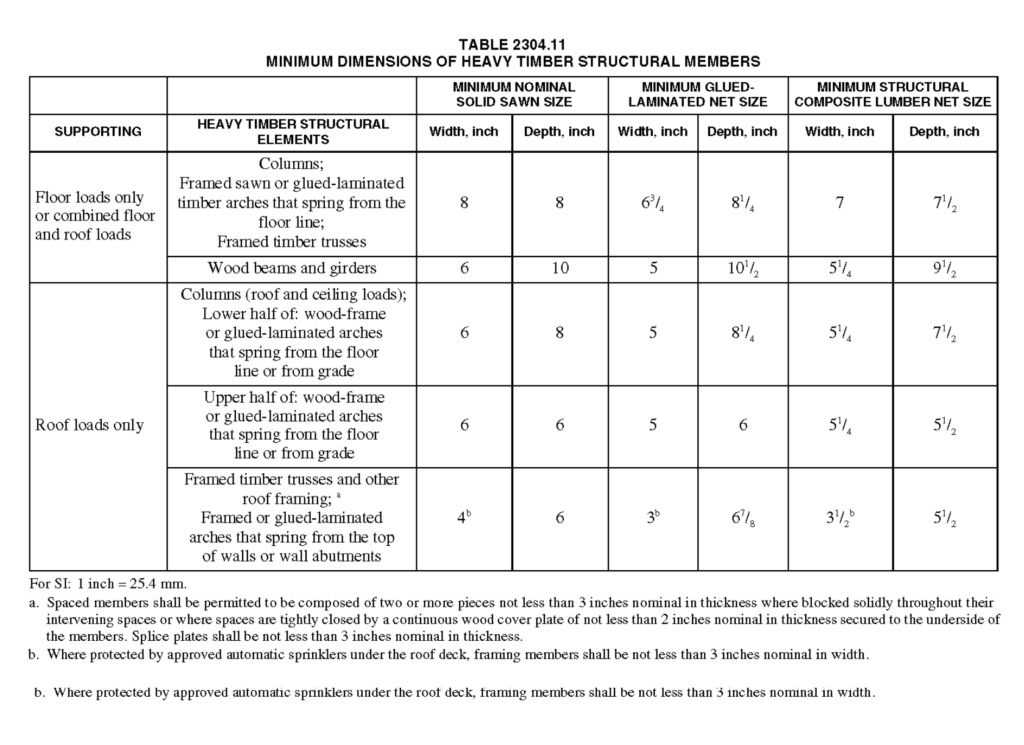 Can glulam be used in one-hour fire-rated construction?

Structural glued laminated timber (glulam) can be used in fire-rated construction. The National Design Specification® (NDS®) for Wood Construction includes AWC TR10, a procedure for calculating the fire resistance of exposed timber members. Exposed glulam timbers can be designed for a fire-resistance rating of up to two hours.

Glulam can also be encased by protective materials such as gypsum wallboard to increase its fire resistance. The protective material insulates the glulam, protecting it from the high temperatures of the fire. Recent research at the USDA Forest Products Laboratory suggests that a single layer of 5/8“. Type X gypsum wallboard will provide 30 minutes of protection and two layers will provide 60 minutes of protection.

I have a glulam beam that is cupped. What causes cupping, and will it cause structural problems?

It should be noted that cupping is not unique to glulam; the conditions which cause glulam beams to cup will have similar effects on other wood beams, including structural composite lumber products (LVL, PSL, LSL). Cupping of glued laminated beams is primarily caused by a moisture gradient across the cross-section of the member, where one face is significantly wetter than the other. This is generally caused by storage conditions that allow one face of the beam to dry, while the other face is exposed to moisture (i.e. stored on damp ground in the sun during construction or stored off the ground with the top surface exposed to rain and the bottom protected). The cupping will generally flatten back out as the moisture gradient lessens. Cupping should be minimal when the beam reaches moisture equilibrium. Increased checking may occur on the wetter face as it re-dries.

In and of itself, cupping will not reduce the strength or stiffness of the glulam beam, however, cupping can cause an eccentric loading, inducing torsion in the section. Severe cupping may also interfere with the installation of the beam. Generally speaking, a small amount of cupping will not reduce the design capacity of a beam. However, if there is a concern, a structural engineer should be consulted to evaluate the effects of any cupping-induced torsion in the beam.

Glulam timbers will perform similarly to sawn lumber of the same species when used outdoors. For unprotected outdoor exposure the wood used must be heartwood of a naturally durable species or pressure-treated with an approved preservative to ensure durability. The International Building Code 2018, Section 2304.12.2.4 states, “ The portions of glued-laminated timbers that form the structural supports of a building or other structure and are exposed to weather and not fully protected from moisture by a roof, eave or similar covering shall be pressure treated with preservative or be manufactured from naturally durable or preservative-treated wood.” AITC 109-2007 explains preservative treatment options for glulam.

Glulam does not require preservative treatment where it is protected from exposure to rain and snow. The humidity in the air is not generally sufficient to raise the moisture content of the wood to a level that will support decay. If the wood is kept dry, it will not decay. A well-detailed roof with fascia or flashing to protect the beam ends is usually sufficient protection for a timber beam. As a rule of thumb, wood should be kept above a plane drawn from the lowest point of the roof or fascia toward the structure at a slope of one vertical unit for every two horizontal units or be pressure-treated or naturally durable (See figures pictured right). Detailing recommendations and related information are contained in AITC Technical Notes AITC-TN-12-1992 and AITC-TN-13-2005 and Standard AITC 104-2003.

Adhesives used in structural glued laminated timber (glulam) are engineered to be as strong and durable as the wood substrates which they bond. They are subject to stringent manufacturing requirements and rigorous qualification testing prior to acceptance for use. Additionally, tests for strength and durability are performed in the laminating plant on a daily basis. These measures result in an adhesive bond with strength and durability comparable to the wood itself.

Can I drill a vertical hole through a glulam beam to install a light fixture?

It is permissible to drill a vertical hole through a glulam beam, subject to approval by a qualified engineer. AITC-TN-19-2012 gives guidelines for the analysis of glulam beams with holes and notches.

My job requires a California Division of the State Architect (DSA) inspector. Where can I find one?

Certain construction jobs in the State of California (schools for example) require a DSA approved inspector onsite. These glulam special inspectors can be found on the DSA Certified Glulam Inspector List.  You can also contact AITC Inspector John Zachariou for additional information at 707.755.0223 or jzachariou@plib.org.

Can structural glued laminated timber (glulam) be treated with waterborne preservatives after laminating?

While not generally recommended due to aesthetic issues, the pressure-treatment of structural glued laminated timbers with waterborne preservatives after bonding may be a viable option for many uses where appearance is less critical. Adhesives used in modern glulam are extremely durable and are considered waterproof. Glulam timbers treated after bonding will accept treatment and resist decay similar to treated sawn timbers of the same species and will perform similarly in service. If the appearance of this product is acceptable to the consumer, it can be used successfully in applications where treated wood is required.

Why is wood pressure-treated?

Pressure-treatment is a process of applying preservative chemicals to wood to increase its resistance to decay. Pressure-treated wood is used in applications where wood will be wet and subject to decay. (See AITC 109-2007, AITC TN-12-1992).

Can pressure-treated glulam be used in place of treated sawn timbers?

Pressure-treated glulam will accept treatment and resist decay similar to sawn timbers of the same species. Provided that the structural requirements of the application are met, treated glulam timbers can be used in place of treated sawn timbers.

Will pressure-treatment with waterborne chemicals after bonding cause delamination?

Pressure treatment of properly manufactured structural glued laminated timber members will not cause delamination. Delamination refers to adhesive failure leading to separation of bond lines. Adhesives used in modern glulam products must meet stringent standards for moisture resistance and durability. Additionally, adhesive bonds in glulam must also pass rigorous daily testing for strength and durability. Consequently, delamination is very rare in structural glued laminated timber whether it is pressure-treated after bonding or not. Checks can occur along bond lines due to stress concentrations between laminations and are often mistaken for delamination. The presence of wood fiber separations or torn wood fibers at the bond line is the key distinguishing characteristic of checks (AITC-TN-11-1987).

How will pressure-treatment with waterborne chemicals after bonding affect the appearance of glulam?

If glued laminated timbers are treated after bonding, dimensional changes caused by saturation of the wood with the water-borne preservatives and their carrier followed by subsequent re-drying may result in raised grain and warping, checking, or splitting. Examples of typical appearance are shown below. 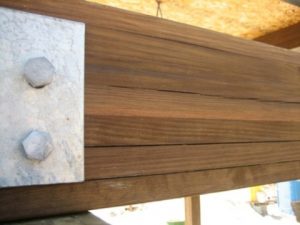 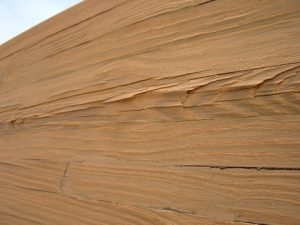 Does glulam need to be incised when it is treated after bonding?

Some species do not accept treatment well and require incising while others can be treated successfully without incising. Southern pine is generally not incised, while Douglas fir typically requires incising for adequate penetration of the preservative.

What waterborne chemicals are used to treat timbers?

The most common waterborne chemicals used to treat timbers include copper azole (CA-C), ammoniacal copper zinc arsenate (ACZA), and chromated copper arsenate (CCA). Ammoniacal copper quaternary (ACQ) is also occasionally used. There are two ways laminated timbers are treated, the laminations are treated prior to gluing and the laminated timber is treated after gluing.  The approved adhesives are listed in AITC 109, Tables 3 and 4.